Once you have set up your campaign (congrats!) you can log in, view and manage your campaign here: https://teamup.organise.network/users/sign_in

As the organiser of the campaign, you're not alone! Not only are the Organise team on hand with support and advice should you need it, your campaign supporters are a powerful group who are with you all the way. There are two useful tools to help you get in touch with your supporters, and bring people on board to help you manage your campaign.

The dozens, hundreds or even thousands of people backing your campaign are what make it powerful. So regularly contacting your supporters is a really important part of running a successful campaign. We recommend an update or action once a week. You can ask people to do the same action more than once, sometimes people forget to finish the action or don't have time the first time you ask.

There are lots of reasons to contact your supporters, to ask them to take snap polls to help decide next steps for the campaign, to update people with news and developments - but the most frequent reason in every campaign is to ask them to share the campaign to help it grow.

Every person who signs your petition or open letter has friends, family and colleagues that would also be interested in the issue. Asking your supporters to regularly share the campaign with their friends and family is the best way to keep support for your campaign growing over time.

A good aim is to contact your supporters once or even twice a week - especially at the start. People have busy lives, so if they don't hear from you about the campaign it will easily fall out of mind, and so it'll be harder to get your supporters involved with any next steps.

We're working hard on making it easy for organisers to set up their own snap polls, run people-powered reports and create more actions for your supporters to take. But until then don't worry, if you've got a plan for the next steps you can contact the Organise team at action@organise.network and we can help make it happen. If you're not sure what to do next, get in touch and arrange a chat with a campaign coach to help you make a plan. 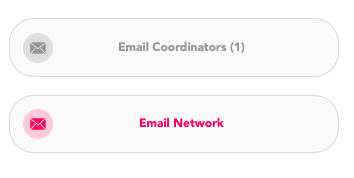 2. Adding more organisers to help you run the campaign

At any point during the campaign you can add extra organisers to help manage and run your campaign. Anyone you add will have the same access and permissions as you.

So it may be that a group of you decided to start the campaign together, and while only one person has set it up, you can then add others as extra organisers and all have the access you need to contact your supporters or create follow up campaign actions.

You can add additional organisers at any point in your campaign. So, you may have started your campaign alone, but if someone you work with is getting very involved and are up for chipping in their help - why not bring them on board to help run the campaign?

To add organisers, just log into your account at https://teamup.organise.network/users/sign_in and click on "group setup" in the right corner, you will then have the option to send invites to anyone you want to add.

Did you find it helpful? Yes No

Send feedback
Sorry we couldn't be helpful. Help us improve this article with your feedback.